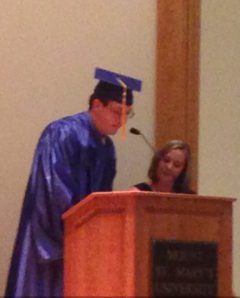 Bret, who has autism now has great jobs and is taking driving lessons.
I will never forget the day I was told my son had autism. My eyes filled with tears as I looked at the doctor’s pictures of her children on her desk.  I envied her so.    All I could think of was my son’s future.  Would he ever marry? Would he ever have a job? Would he ever be happy? My son is now 23 years old.  His life has not been easy because of his disability.  However, he is one of the most motivated inspiring souls I have ever know.  He wants to achieve great things.  He just needs some support. Bret graduated from Success School  in 2014.  It was a wonderful experience for him. He had two part time jobs, had no behavior incidents for over 3 years,  and was excited to “become an adult”.  He presented a beautiful speech at graduation. Bret is high functioning, but if he is not in a structured program he can regress quickly.  The day programs were not a good fit, so we chose a provider that would give us an “individualized” program.  The wonderful man that had graduated quickly changed.  The program had several coaches.  We had 13 in one year.  Even though my son has a disability, he can tell if a coach is not interested in meeting his goals.  Some coaches were good for a short time.  I had two employers complain about three of the coaches and ask that they not return.   One left my son at a volunteer job site, asking  the director to take my son home.  Others would not show, appear disinterested, played on their phone, or watched tv.  One coach appeared “under the influence”.   When I questioned this I was told they “do not conduct drug tests”.  Needless to say, my son’s behavior increased tremendously.  The provider was unable to fill the hours or structure that my son needed.   They refused to implement a behavior plan, they did not record goals.  The staff was greatly underpaid and not vested in my son’s future.   I decided to go to self directed. The hurdles we had to undergo in the switch to self-directed were disgraceful.  During this time, my son’s behavior continued to decline.  After two months and incredible headaches, we were able to start self-directed. Although we never received the remaining funds from the provider, going forward I was able to greatly enhance the program.      I was able to hire employees at a 50% increase as well as a a 36% increase in hours.  This is with the SAME ANNUAL BUDGET THE PROVIDER HAD.  I am able to hire more qualified and committed staff.   The commitment employees have toward a family is vastly different then their commitment to an agency.  It is not only the rate of pay, it is a more vested relationship.  In addition we have relatives work with my son.  No one is as committed to my son as is his family. The difference in my son’s behavior and progress is truly unbelievable. We have goals that my son is over achieving.    Bret’s negative behavior has decreased by over 90%!!  ( yes, unlike our previous provider we keep records!) This is due to the individualized program only we can provide.  Three years ago, he was considered not qualified to drive. (In his excitement for an evaluation, he faxed his exam and booklet to DORS.  We were told that is “inappropriate behavior” and reflected on his ability to learn to drive).  Bret has been taking private lessons at a driving school and will soon take his driving exam!  My heart only raced slightly when we were practicing the other day.

He has secured two new jobs and is planning  to start a vending route.    My son is now on his way to possibly being independent, whereas last year I was considering hospitalization. I am confused as to the proposed amendments restricting family members and flexibility in self directed services.  Why would Maryland DDA want to increase costs by eliminating this?  SDS is fiscally the most efficient and cost saving program.  In addition the results will provide long-term cost benefits to the State of Maryland.  Do not get me wrong, self-directed is A LOT of work.  The administrative hurdles are incredible.  Staff hiring & training is ongoing.  We appreciate the small salary the family gets, but if I was not working in self directed, I would be making 4x the amount.  I have heard webinars where families were accused of medicaid fraud.  Please note, that is not why anyone is doing this.  We are all highly educated and skilled people and can earn much more in the workforce.  This is a sacrifice for love and well being for our child.  I cannot imagine anyone doing this for that reason. To hear a  representative of Maryland DDA state in an open forum that parents are collecting money-I was hurt.    As a taxpayer, to hear the amount of money that has been funded for the amendments and the lack of transparency, I am outraged. My dream is for my son to be as independent as possible.  Someday, with the right supports, I hope he can marry, have a full-time job, have a home……..  Maybe it is a dream…..  However, I know with SDS we have a chance at that dream…..  Please don’t tell us to not dream.