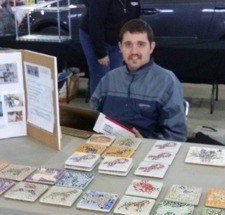 Justin…….. he now has his own business and loves participating in his authentic community.
After getting suspended from public high school multiple times for aggressive behaviors, the team had a meeting where it was decided that our son would be going to a non-public school, which was Forbush School in Hunt Valley.
Where they specialized with individuals who had autism, aggression, etc. The class rooms consisted of approximately 5-6 students and 3 – 4 staff. The areas were much less stimulating. Our son did much better with this environment. He was learning vocational skills, which would help him down the road after his graduation from Forbush. While our son was in school, I had been working for an agency vocational center in Westminster. It was expected to be a choice of where our son would go after graduation. As Justin was getting close to graduating from Forbush School, there was a meeting with this agency in Westminster, then they went to Forbush School to meet with staff/our son to see if this agency would be a fit for him. Everything had been gone over on how he had a 1:1, had aggression issues, was obsessive about certain items, needed a schedule board, used a communicator to speak for him, a reinforcement token board for behaviors, etc., with the staff of this agency. As it was looking like he was going to be accepted to this agency, the 1:1 person and senior staff member who would be working with him at the agency, visited him several times, working with staff at Forbush to make sure the transition went smooth, along with making sure that they were prepared for what he would need after graduation. Then when he started at the agency that I worked at (but not in same area as our son), that same staff and a director (who was supposed to be a BPS trainer for behavior) kept needing information regarding what his likes were, how to use the communicator that he used to communicate with, etc. All this information was given repeatedly to staff at the agency. At first the 1:1 was really working with him, and everything seemed good. The vocational skills that he had learned from Forbush were helping him excel in several areas. As long as he was engaged in activity, the aggressive behaviors seemed to be in check. Then our son started having behaviors (aggression) over obsessing about certain objects that were favorites of his. It was suggested that the agency staff remove those items. Noise level in the room was loud, confusion, and other individuals having behaviors as well, wasn’t a positive environment for him. He had gone thru several 1:1 staff in the short period he was at the agency, some trained in things that didn’t even have to do with working with individuals with behaviors. In the end of his time at the agency, he was discharged because of the behaviors, which the agency wasn’t equipped to handle.
Once discharged from the agency, the team our son has, decided that the Self-Directed program would be the best for him. I left my position at the agency, and was hired on as his 1:1. The Self-Directed program has been a blessing in disguise. Here the program/IP was developed upon his strengths, and interests. Justin has a great team, his service coordinator, FMS, support broker, speech pathologist, behavioral consultant, and his family. This has been the best choice that has been made by him and for him. He does things/activities/ etc. that are in line with his IP. He has increased his usage of his communicator. Since one of his favorite things to do were puzzles, I came up with the idea of using one of his strengths and love of doing puzzles and applied that to doing mosaics. This is when Justin’s Creations was formed. He has excelled and loves doing the mosaic tiles, has learned how to cut them with mosaic tile cutter, fit the pieces in like a puzzle. Since he has been in the self-directed program he has been very open in trying new projects, activities, etc. He goes out in the community almost every single day, expands knowledge of different work skills, and home skills. He works on cooking different things, has mastered the washer & dryer at the local laundromat, has meaningful activities in the community, has been increasing his comprehension of swimming at the community pool, goes to Calm Acres twice a week for equine therapy where he has blossomed with increasing tasks that he does, learning new work skills, and some being done independently. He has made several friends at places of interest that he frequents. We can’t say enough as to the progress he has made on all levels, and him living his life and being happy is just priceless. I have included photos of Justin doing various mosaic projects, at Calm Acres, swimming, at the CC Ag Center selling some of his mosaics, fishing at local pond, making bird seed ornaments which he would hang at Calm Acres, working at a farm in Manchester removing tubes from seedlings. As his mom and 1:1 staff, I am so proud of him! Instead of DDA making the major changes they are trying to make with the CLS Proposed Draft #2, which will change the program drastically, they need to open their eyes up to the fact that the Current Self-Directed choice these individuals have made is working for them and their families. Written by Terri Pumputis for Justin Sauter.